Today (3rd May 2021) is the centenary of the political entity known as “Northern Ireland”, and 100 years from the date of connected customs and other border controls.

The UK House of Commons Library published today a briefing paper on the origins and development of the Northern Ireland borders. This paper is here.

Key points are set out below –

(1) Claims by England over the island of Ireland and its peoples date from the 12C.

(2) The Government of Ireland Act 1920 (UK) – Royal Assent on 23 December 1920, created devolved parliaments in “Northern Ireland” and “Southern Ireland”. An administrative boundary was to divide the two.

(3) The separate parliaments of Northern and Southern Ireland were given legal basis (UK) by Order in Council under the 1920 Act on 3 May 1921 (hence 100 years as respects Northern Ireland).

(4) The Anglo-Irish Treaty signed 6 December 1921, allowed Northern Ireland to “opt out” of coming under the jurisdiction of the declared Irish Free State (Ireland), which it did on 7 December 1922. This triggered a Boundary Commission, which was to revise the boundary between NI and the Free State.

(5) In the interim, a customs frontier was erected along the Northern Ireland/Free State border on 1 April 1923. This “hardened” the boundary for the first time. Cross-border roads were identified as “approved” or “unapproved”; duties were payable on many commercial goods.

(6) The Tripartite Boundary Agreement of 3 December 1925 confirms the existing border.

(8) 26 counties of Ireland explicitly become a Republic under the terms of the Republic of Ireland Act 1948 (Ireland), definitively ending membership of the British Commonwealth on 18 April 1949, further strengthening the border as an international frontier. The Ireland Act 1949 (UK) subsequently confirms that the “consent” of the NI Parliament is required to end or alter partition.

(9) When the IRA launch “Operation Harvest” in 1956, the border is “securitised” for the first time, with “unapproved” routes cratered or spiked. This happens again in August 1970 as a response to “The Troubles”:

(10) Both Ireland and the UK accede to the then European Economic Community on 1 January 1973. As a result, the border between the two becomes softer, but customs checks remain in place, as does the Common Travel Area (that exists between the UK and Ireland).

(11) Following the Single European Act of 1986, customs checks cease at what the UK HM Customs & Excise call the “Northern Ireland Land Boundary” at midnight on 31 December 1992. Only the border’s security aspects remain.

(13) On 1 January 2021 the Northern Ireland Protocol (under the EU-UK Withdrawal Agreement) comes into effect. This avoids “customs and regulatory checks or controls and related physical infrastructure at the border between Ireland and Northern Ireland” by creating an “Irish Sea border”.

Under the Protocol, Northern Ireland remains aligned to a number of European Union rules, as set out in the Protocol’s Annexes. These include the Union Customs Code and the Official Controls Regulation on food and animal products. As a result, traders moving most commercial goods from Britain to Northern Ireland (but not from Northern Ireland to Britain) are required to meet certain customs requirements and – in the case of products of plant or animal origin – various Sanitary and Phytosanitary (SPS) requirements.

To do this, traders are required to make customs declarations, and in some cases pay tariffs. Traders must also provide Export Health Certificates (EHCs) for agri-food goods. These documents, and the goods themselves, may also be subject to checks. The UK-EU Joint Committee (provided for by the EU-UK Withdrawal Agreement) has (to date) agreed a number of exceptions whereby these requirements could be reduced for certain authorised traders: for example, the so- called “grace periods” during which supermarkets and their suppliers are permitted to move food products into Northern Ireland without an EHC, provided certain other conditions are met.

Under the terms of the EU-UK Withdrawal Agreement, the 90 members of the Northern Ireland Assembly have the periodic power (after 31 December 2024) to decide whether to terminate or continue the Protocol arrangements. If the former, then the Joint Committee is obliged to make alternative proposals to the UK and EU in order to avoid a hard border on the island of Ireland. 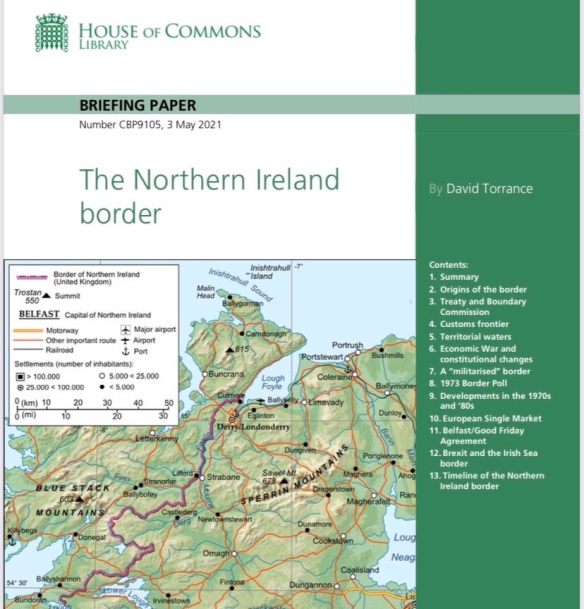