There is a developing situation regarding the EU Galileo project. EU negotiator Michel Barnier referred to it in a speech yesterday – his speech is here

One word on Galileo. There have recently been many press articles – and many misunderstandings.

The UK decided unilaterally and autonomously to withdraw from the EU. This implies leaving its programmes as well.

So, we need to put the cooperation on Galileo between the EU and the UK on a new basis.

In doing so, our responsibility is to maintain the autonomy of the EU and to protect our essential security interests.

The EU’s rules on Galileo have been in place for a long time, and are well known to the UK.

In particular, third countries (and their companies) cannot participate in the development of security sensitive matters, such as the manufacturing of PRS-security modules.

Those rules were adopted together by unanimity with the UK as a member, and they have not changed.

Those rules do not prevent the UK, as a third country, from using the encrypted signal of Galileo, provided that the relevant agreements between the EU and the UK are in place. ”

The Telegraph (and others) report the UK Business Secretary Greg Clark has written to 13 UK businesses involved in sensitive work on the EU Galileo project, such as coded communications, saying they must have the UK Government’s sign-off to start new contracts.

EU Notices issued as respects Third Country rules and arrangements in a range of subject areas are found here.

In January, the EU announced the back-up site for the Galileo Security Monitoring Centre will move from the UK to Spain. The press release is here.

A major role carried out by the European Court is oversight of the enforcement of European Union Treaty principles embodied in EU environmental law.

The UK authorities had announced a new body would be set up to replace the role of the European Court in this respect.

This morning, the consultation document is announced for this new body (applicable to England only). This document is here. Consultation lasts until 2 August.

The new body will be established by the Environmental Principles and Governance Bill (a Brexit bill – England) that will be brought forward in the Autumn. The consultation addresses the development of this Bill.

Part 2 – Accountability for the Environment

NOTE : this post will be UPDATED when the UK authorities respond to the consultation. If you are interested in developments, please make a note to return to this post in the Blog, a separate alert will not be sent out.

The EU and UK negotiating teams published on 4 May, their joint topics for their discussions on the framework for the EU-UK future relationship.

Please note the latest ones include EU Notices on Aviation and the internal Energy Market.

Unless a ratified Withdrawal Agreement establishes another date, the UK will become a third country (as respects the EU rules and participation in EU institutions and bodies) from midnight CET on 29th March 2019. These Notices set out the changes that will apply from that date. The changes are subject to any transition arrangements that may be contained in any ratified Withdrawal Agreement at the date above.

I posted several times regarding EU Notices and Notices from EU regulatory agencies. These remind that the UK will be a third country (as respects the EU) on exit at 12pm CET 29th March 2019. If you have not already done so, please read these Notices.

Any Transition Period that is agreed is in the context of the EU-UK Withdrawal Treaty, and will continue certain EU arrangements only.

On 11th April 2018, the European Medicines Agency (EMA) confirmed that the EU27 member states and the EMA had completed the task of redistribution of the UK portfolio of centrally authorised medicine and veterinary products. The UK will not be a member of the EMA on its exit. Arrangements were already in place to relocate the EMA (from the UK) to an EU27 member state.

Please read the information that is published about this redistribution here.

More EU Notices were issued 21st March (and one on 19th March) – here.

Reminder : the UK is a third country on 30th March 2019. Please read the EU notice that applies to your operations. Note also that EU Agencies (on the link) also issue Notices.

The EU-UK Withdrawal Agreement (subject to ratification) may change this date to 31st December 2020 with conditions (via transition clauses in the Agreement).

The EU-27 agreed today its guidelines for its negotiation of a EU-UK trade deal. These guidelines are here.

Further EU Notices were issued on 12th March. All Notices are gathered here.

Notices are important because they set out the legal position that will operate from March 2019. Transition arrangements that might be agreed may change the requirements.

The UK government has today published its provisional analysis of the returning EU powers that will result in the devolved administrations of the UK receiving extensive new powers as the UK exits the EU. This document is here.

The analysis covers 153 areas where EU laws intersect with devolved competence. There are 24 policy areas identified that are subject to more detailed discussion to explore whether legislative common framework arrangements might be needed, in whole or in part.

Please look out for further Blog posts, as the situation evolves. 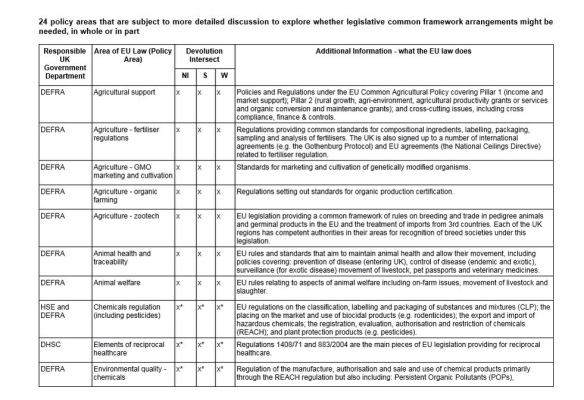 The European Commission has published four further EU Notices to Stakeholders and Companies. I posted earlier with the website where all such EU Commission Notices are compiled. Here it is again – Link.

Please remember the EU agencies are also publishing Notices. I posted earlier about this. Here is the ECHA support available – Link.

UPDATE (19th March) : an updated colour coded Withdrawal Treaty draft is published here. This contains the results of the EU-UK discussions held 16-19 March. The next step is the Council of the EU heads of Member States meeting 22/23 March, where it is anticipated a further statement will be made. I will summarise the agreed points at that time.

Please note : at this point 25% of the document is not agreed between the EU-UK. The areas not agreed relate to governance and the Irish Border.

UPDATE (15th March) : an updated Withdrawal Treaty draft (123 pages) is published here. This has now been sent to the UK authorities for the negotiation.

The EU Commission has now published its draft of the UK-EU Withdrawal Treaty – it is here.

It will now be discussed over the coming weeks with the European Council (Article 50) and the Brexit Steering Group of the European Parliament before transmission to the UK authorities for negotiation.

I will update this Blog post here with summary points, as they become agreed with the UK authorities. Please remember to refer back to this Blog and not wait for posts in your inbox, as updates on a particular post are not reissued as emails.