The EUTF will present the draft negotiating directives for the future relationship negotiations with the UK in a press conference at 11am CET.

Watch live at this address: audiovisual.ec.europa.eu/en/ebs/live

I will update this post, online, (you won’t get a new Blog post, so diarise to check back online) with a link to these draft objectives when they are published. These will anyway be found on the EU’s new website (see my earlier Blog post this morning).

The ‘Task Force for Relations with the United Kingdom’ (UKTF) was established on 16 November 2019, as part of the European Commission’s Secretariat-General.

It replaces the Task Force for the Preparation and Conduct of the Negotiations with the United Kingdom under Article 50 TEU, which was created on 1 October 2016 to lead withdrawal negotiations.

The Task Force coordinates all the Commission’s work on all strategic, operational, legal and financial issues related to the UK’s withdrawal from the European Union, in full respect of European Council guidelines. This includes the negotiations on the future relationship with the UK, the implementation of the Withdrawal Agreement, as well as the Commission’s ‘no-deal’ preparedness work.

The Task Force operates under the direct authority of Commission President Ursula von der Leyen and in close cooperation with the Secretariat-General, all Commission services concerned and the European External Action Service (EEAS).

[the UK Prime Minister will also make a speech this morning, the content of this speech is already briefed to the UK press] 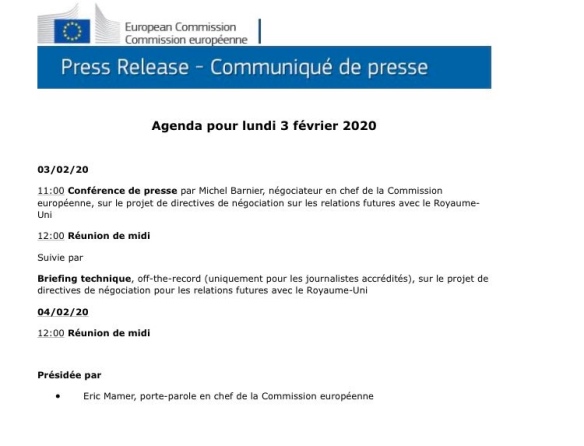 I posted yesterday (Brexit Status) that Withdrawal Agreement text had been agreed between EU and UK negotiators. This text was agreed last night at a meeting of the UK Cabinet, and then published – here. Alongside the 14 Nov 2018 Withdrawal Agreement text, a starter for the Outline Political Declaration on the Future Relationship was also published, and a Joint Statement (in that link).

Alongside this, DExEU also published and Explainer and Explanatory Notes – here.

The objective of the Withdrawal Agreement (WA) is to put in place an orderly exit of the UK from the EU on 12 midnight CET (11pm GMT) 29 March 2019 – dealing with matters such as citizen rights, money, and a series of separation technicalities. The WA (if ratified as a Treaty) also puts in place a Transition Period (in the UK, this is termed an Implementation Phase) lasting until 31 December 2020, during which EU Law will continue to apply and trade will be unchanged.

(1) the WA text must pass through a series of gates before ratification as a Treaty. When a Treaty, it will be given effect by the EU (Withdrawal and Implementation) Bill in the UK, which itself must be created and enacted. And this new Bill will necessarily amend and rewrite parts of the already enacted EU (Withdrawal) Act 2018. It is hoped, but by no means certain, these gates can be crossed by the exit date of 29 March 2019.

(2) during the transition to 31 Dec 2020, EU Law would continue to apply to and within the UK and override domestic law. But, as the UK will be a third country, this means it will have only minimal influence on the creation and enactment of EU law in that phase.

(3) a single extension for an (at present unspecified) length of time is permitted to the Transition Phase, this extension to be agreed by 1 July 2020. A firm end date will need to be negotiated by the European Council on 25th Nov (if it takes place).

(4) a specific Protocol for handling the border between Ireland and Northern Ireland is the first of 3 Protocols in the 14 Nov 2018 WA text. This Protocol includes a detailed “backstop” to be used if the Future Relationship is not in place by the end of the transition period.

(6) the objective is to transition from the current EU member state status direct to the Future Relationship (Trade Agreement) status, via the Transition Period (which could be extended).

Further work is ongoing, and the WA text must pass a series of gates.